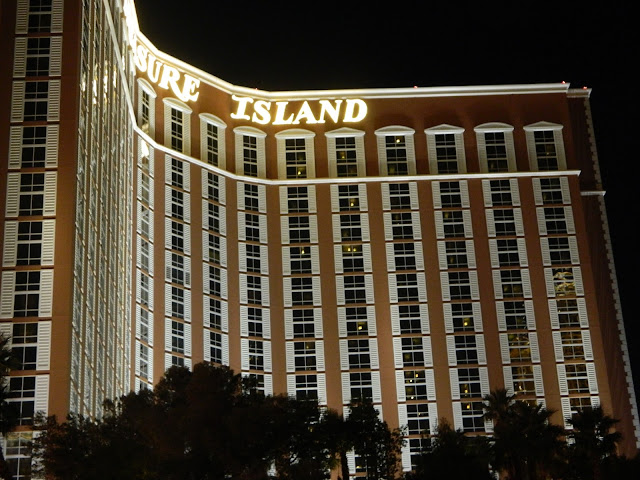 Treasure Island was previously owned by MGM Mirage, recently in 2008, taken over by Phil Ruffin.

Phil Ruffin is a well known friend of Donald Trump who sold Phil 3.5 acres of land in order to build the Trump International close to the Las Vegas Strip.

With that purchase, Donald Trump became business partners with Phil Ruffin. The Trump International Hotel Tower is a successful business attracting visitors across the world, but Phil wanted sole ownership of T.I.  So, in 2008 Phil Ruffin made a deal with MGM Mirage buying the Treasure Island Casino Resort for a mere $775 million. The sale of Treasure Island had ease financial risk for their biggest investment ever - the 9.1 billion City Center development. 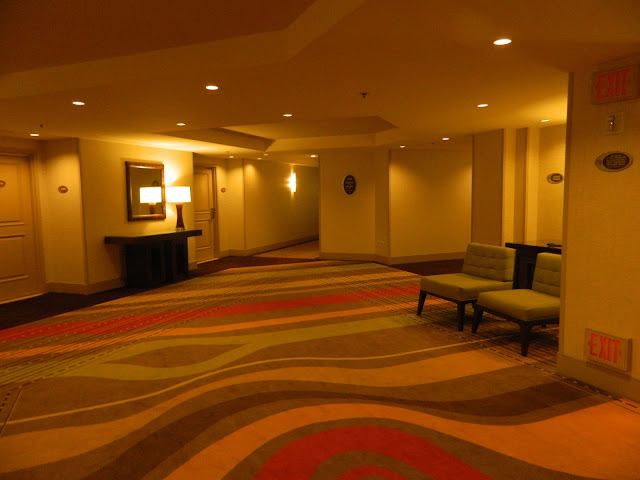 Phil Ruffin made a great deal with MGM Mirage, due to the fact Treasure Island was worth one billion.

Our first impression of Treasure Island had sparked interest as we passed by the famous pirates ship called Sirens of TI. An enchanting show featuring a band of renegade pirates from the 17th century with a story of seduction, dancing along with captivating songs and clashing fun filled danger. 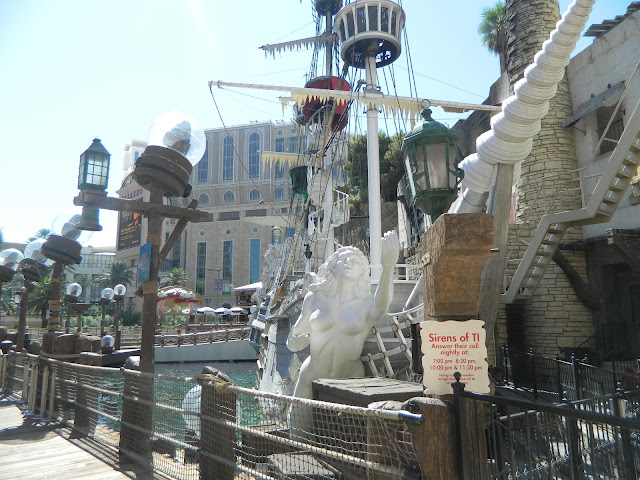 Within minutes we were confronted with a steady long line-up at check-in, noting that the lobby needed some TLC. It wasn't long before we were up front with our hotel guest server with an wonderful smile. A quick and painless invitation to our room looking out at the pirate ship below.

Our room was clean with a tasteful decor making anyone relax in a perfect setting. Trust me when I say I'm fussy when it comes to a clean room.  T.I. did not disappoint with a very clear appearance throughout the bedroom and washroom facilities.

As night settled in we decided to take in the colorful tropical restaurant where," It's always a party at Kahunaville!  We order an exotic island-infused drink where the glasses were as tall as us.

I ordered the steak dinner while my wife had the Piña Colada Chicken. But first we had to have the popular Calypso Calamari while sipping on our flaming drinks. The steak was a little under cooked but was quickly resolved with a fresh cooked steak just exactly how I wanted it - medium rare. The whole experience was worth it and highly recommended.

After our entertaining meal at Kahunaville we headed over to the casino, where a grandmother passed by us on a scooter. I thought that was interesting to know that complimentary wheelchairs and rental scooters were available with the TI Bell Desk.

Personally never had any use for this, but it sure is an important factor for those that have trouble getting around a vast impressive resort. In fact, I have had Vegas Reviews followers ask this very question " My mom can't get around very well - do they offer assistance?"

During the afternoon, we took some photos of the new Senor Frogs, which we tried out during the evening.  It wasn't the service we expected and were placed in a very dark location, where we both couldn't even read the menu.  The young female server was more interested in serving us drinks, then answering our questions about the menu AND the terrible lights predicament.  Due not being able to read the menu in the dark, I asked if they had a cheeseburger. She nodded. We asked for two and left at that.  Maybe because we are older folks, her service wasn't particularly the best.  The rest of the crowd were mostly in their twenties. Anyway, we left it at that and we won't be back for Mr. Senior Frogs.  There are so many restaurants to choose from along the Vegas Strip, there's no point in bothering with bad food or service - just move on.
This also doesn't imply any wrong doing with T.I. Treasure Island Resort personal were cheerful and accomendating, providing us with wonderful service throughout. 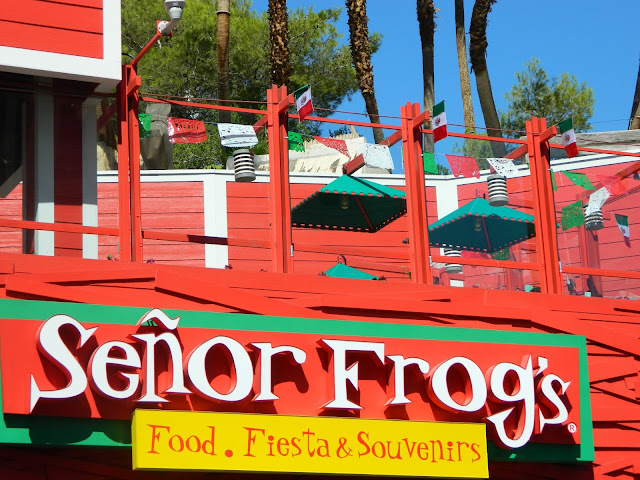 The next impressive hot spot was the nationally acclaimed metal artist Scott Cawood teamed with Metropolitan Choppers to create the custom Sirens of TI chopper on display in the TI Casino lobby. One word " Wow!" 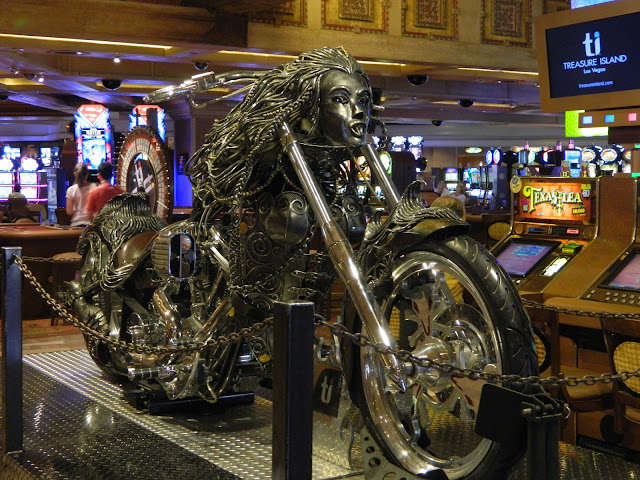 Of course, we had to take in the took in the Sirens of TI with performance times:

What a fun way to spend the evening. To top it off we had a late luncheon at the Canter’s Delicatessen which has been a landmark establishment in L.A. since 1931, now serving at Treasure Island. Quoted by TI, "...Serving fresh, homemade specialties such as hot pastrami, corned beef, roast turkey and authentic matzo ball soup, Canter’s Deli offers delicious casual fare daily." 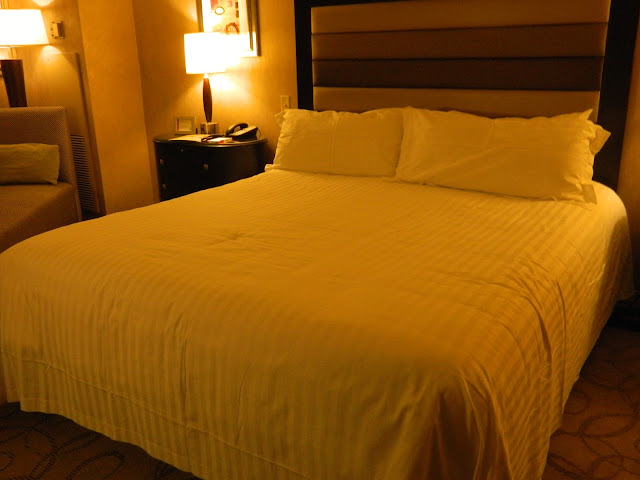 We shared the corned beef sandwich with the largest pickle I have ever seen. This one sandwich was more than enough and well worth the price of $15.
Of course, like ever other resort in Las Vegas, we had to enjoy the pool scene.  It was an awesome experience with wonderful servers. 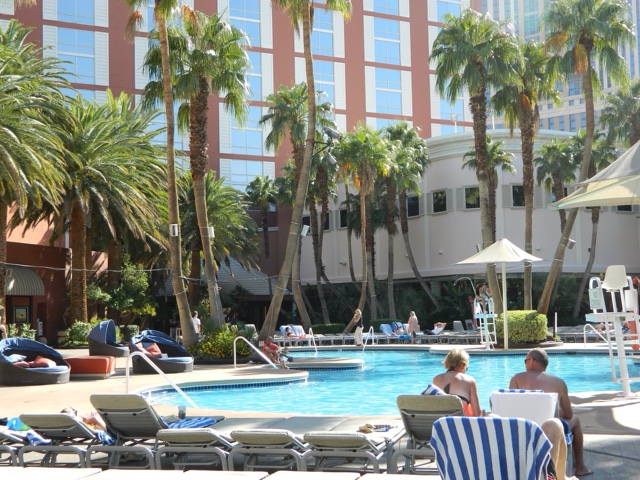 Overall our stay at T.I. was indeed enjoyable and would suggest this great fun-filled experience at Treasure Island Resort and Casino.
Unfortunately we never had a chance to enjoy Mystère at TI due to other plans, but you can enjoy this show for as low as $60 with up-front seats for $109.

Have you been to TI ? Come join the "fun" with Vegas Reviews on Facebook


Check out our most recent review of The Venetian, Las Vegas ( August 2013)


About Vegas Reviews:
Vegas Reviews is not associated with any Vegas Hotels or paid by it's own personal reviews of hotels in Vegas.
We're just simply a fun host Facebook page featuring only about the fun in Vegas.
When we find a wonderful stay in Vegas, I like to write about the fun we had at the Vegas Hotel.
In this case we had fun. I don't give reviews very often, so when treated wonderful - I write about it.
Also - Vegas Reviews is not a company. Just a fun social Facebook Page having fun in Vegas. It would be nice to be paid for reviews, but this is just not the case here. So - if you enjoy all the fun in Vegas and would like to join our fun social page - please come on by : Vegas Reviews
Please share the fun and tell your friends about Vegas Reviews - Let's see how many friends of Vegas - are there?